Despite My Non-Zionism, I’ve Chosen To Stay In The Jewish Students Union 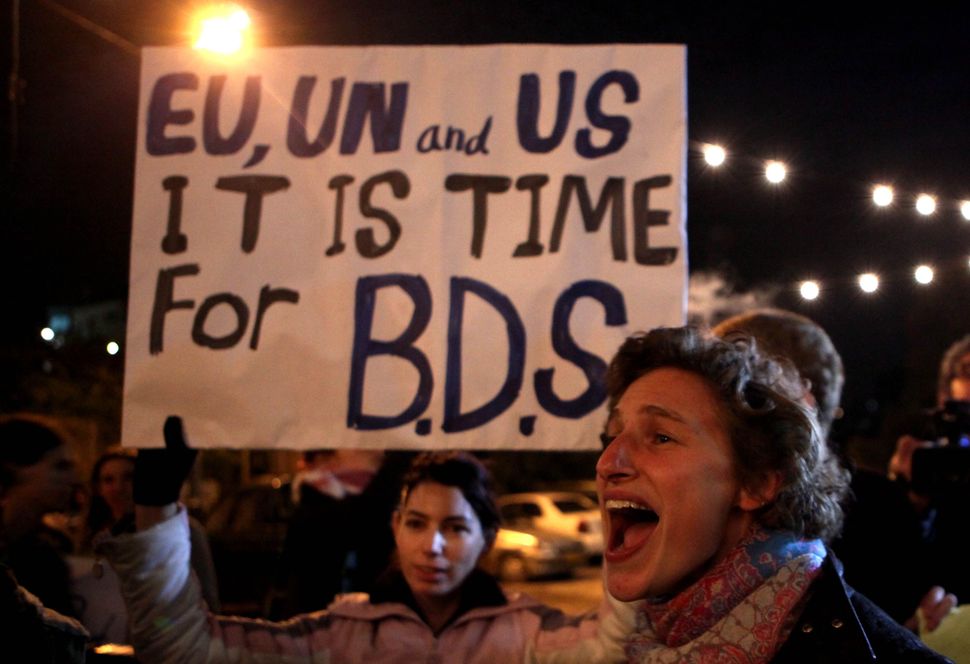 My recent campaign to be the President of the UK’s Union of Jewish Students attracted a fair bit of attention in the Jewish media, largely because, as Joseph Finlay recently wrote in the Forward, my views are “diametrically opposed to those traditionally taken by UJS,” the British Union of Jewish Students. I am a non-Zionist, and I broadly support the movement for the Boycott, Divestment and Sanctions of Israel. The CEO of UJS, David Davidi Brown, responded to Finlay’s article, taking issue with Finlay’s assertion that UJS’s “raison d’etre has long been defending Israel on campus,” and that myself, last year’s candidate Eran, and our group of determined leftists, are the trailblazers of change.

Brown describes all the other, non Israel related, and commendable work that UJS does. I was particularly interested to learn about UJS’s antifascist activity in the 70s. Having campaigned against the far-right group National Action, I am pleased to hear that the union that represents me also took action, although I’m uncertain that banning them was the correct course. My experience of getting involved in UJS for the first time, through Eran’s campaign and then my own, has been a pleasant one —- in large part thanks to David and the rest of the team. It has been really great to learn about UJS work on mental health and LGBT+ issues, and it would clearly be wrong to suggest that “only BDS supporting students can deliver broader and more progressive campaigns.”

But here’s the rub: I have been a student on and off for a decade, and this is the first time I have ever gotten involved with UJS. While the union itself takes an explicitly pro-Israel stance, campus Jewish societies are often very hostile to students who express openly non or anti-Zionist views. More than half those involved in our campaign, including myself and last year’s candidate, have been in some way excluded from Jewish life on campus. Many of us also have witnessed the damaging effects of pro-Israel and anti-BDS action, which is being used alongside our government’s racist PREVENT legislation to silence the voices of Palestinian students. In the comment section of the Times of Israel op-ed that I wrote during the campaign, I was once again called a “kapo.” And at the UJS conference I was almost brought to tears as right wing students filibustered our motion for commemoration of the Palestinian Nakba alongside Yom Haatzmaut.

As a Jewish student who does not support the state of Israel, getting involved in Jewish student politics has not been easy. Finlay’s argument is not so much that we are changing UJS, although we certainly hope to, but that the fact we even ran at all is an exciting indicator of broader change. This is not just down to us, it is down to UJS. We are extremely fortunate that, unlike in the United States, we have a democratic union that it is open to being challenged.

I am particularly grateful to individuals, like David, who recognized the particular challenges Eran and I might face during our campaigns, and did everything they could to support us, whether or not they agreed with us. However, showing gratitude to a union whose job it is to represent me feels a bit like showing gratitude to a straight man for helping me with something and not using it as an excuse to hit on me.

UJS claims to represent all Jewish students registered on UK campuses. As it states proudly on its website, “we are the voice of over 8,500 Jewish students … we come from the left, centre and right and can be found across religious and political spectrums.” Only around 10 percent of those 8,500 have actually voted in the presidential elections. David may be right that UJS’ pro-Israel, anti-BDS stance reflects the vast majority of its members, but both this and last year’s elections have proven that at least 8.5 percent of us are in firm opposition. The motion we passed at UJS conference this year — to ensure that non-Zionist voices are represented — was a great step, but it is a motion non- and anti-Zionist students have been trying and failing to pass for six years. Despite all our efforts, none of our other motions were heard, and I left UJS conference feeling more than a little deflated.

As Finlay pointed out, it might be easier for us to walk away, to make the choice that a union that still supports Birthright even after it recently banned encounters with Palestinian citizens of Israel, does not and cannot represent us.

We have chosen to stay in this union because of all the other great work it does and because of the sense of comradeship we feel with other Jews, regardless of views on Israel. We don’t want to walk away from our community. We want to challenge it. And if UJS wants to keep representing all Jewish students, we should not need to be grateful to be included.

I welcome the commitment of David and other representatives of UJS to work to ensure we are heard. His condemnation of the BDS movement’s failure to “return the favor,” however, is to some extent based on a false equivalency. The BDS movement is not a union or political organization. It is a targeted civil rights movement aimed at forcing the Israeli state to comply with international law and grant freedom, justice and equality to Palestinians.

I take the point about the hostility that Jewish students have sometimes experienced from BDS groups, which needs to be tackled. It also goes both ways, and much of my engagement with Jewish student societies over the years has been in intervening when members of Jewish or Israel-related student groups have been threatening or racist towards Palestinian students. Mediating in this sometimes hostile divide, dealing with the anti-Semitism that does occur within anti-Zionist movements, and at the same time calling out racism when we see it in our own community, was a huge part of my campaign. As David points out, Jewdas, a collective I am part of, has a long record of doing just this. In fact, it is exactly for this reason that we lefties want to get involved in UJS — to make an intervention at a time when the situation on campus seems to be getting worse and is not being dealt with properly.

Bridging the divide, helping Jewish students to learn to stop worrying and love BDS and at the same time asking Palestine activists to address anti-Semitism and be more sympathetic to Jewish perspectives Israel, is our job. It is right for David to call on Jewish Palestine activists to listen to our Zionist colleagues. It is not, however, the role of the Palestinian-led BDS movement.

UJS’ Bridges not Boycotts campaign underlines the flaw in the well meaning but ultimately quite offensive attitude of Zionist organizations towards Palestinian activists. Like many past initiatives, it calls for friendship and mutual understanding, but only as long as one party desists in their demand for equal civil rights. When Palestinians aren’t interested in a friendship on those terms, they are met with baffled indignance.

During the course of my campaign I met and was contacted by a number of Palestinian students. One of them told me about how he had tried to engage with Bridges not Boycotts, and even attended a few events, but felt excluded when he tried to state his views. I will end with a quote from a statement he wrote, which I shared with a final message on my campaign page:

“Whats more important to you? Seeing an end to the human rights abuses that you claim you want to end or assuring your somewhat guilty conscience that you have done your part? Ask yourself, are you building bridges for peace? Or peace and quiet? You claim the need to pick up arms with one of the largest funded armies because it is your right to defend yourself, yet you call foul when we choose to make a stand, without violence, by boycotting our oppressor.”

Annie Cohen is a contender for the Union of Jewish Students presidential election.

Despite My Non-Zionism, I’ve Chosen To Stay In The Jewish Students Union