I’ve marched in the Jerusalem day parade — and this year, it’s a terrible idea 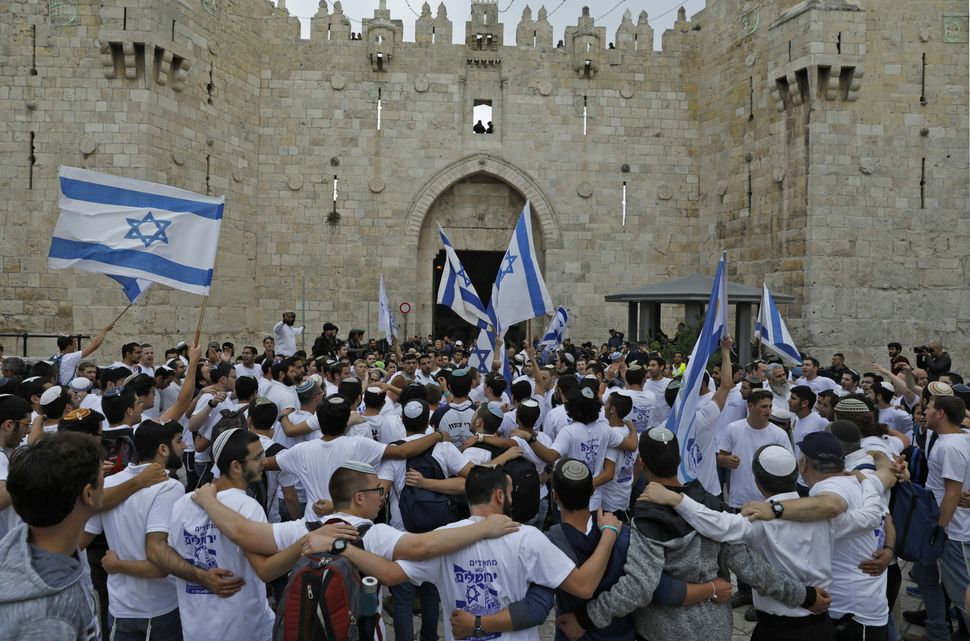 There was no doubt in my mind that I would participate in the flag march through the streets of Jerusalem. Down to Damascus Gate, through the Old City’s Muslim quarter and finally arriving at the Western Wall, the flag march is a decades-old tradition celebrating the reunification of Jerusalem and the city’s bond with the Jewish people.

As an Orthodox Jew and proud Zionist, living in Israel between high school and college, I partook in the march on Jerusalem Day in 2018. Chanting, singing and dancing, I fondly recall the event. This year on Jerusalem Day, while the march was cancelled mid-parade due to the very first rockets fired on Jerusalem by Hamas, it has now been rescheduled for Tuesday June 15 – a move that I cannot support.

Despite the euphoria, there was also something immensely disturbing about the march — something that I couldn’t ignore. As I neared Damascus Gate, I noticed local Palestinians were barred from the thoroughfare. In the Muslim Quarter stores were shuttered, while Palestinians were sidelined by Israeli soldiers to their store’s confines, hoping theirs wouldn’t be the one trashed by Jewish youth. They watched us intently, some holding their confused and scared children close by. I could see the mixture of sadness, resentment, fear and defiance in their eyes.

The experience was so troubling, it forced me to ask myself what the purpose of the march was. Was this about Jewish authority over Palestinians? Was this about violating their humanity? Is this how us religious Jews can best express our love for Jerusalem?

The moment the march turns towards Damascus Gate, it’s no longer about celebrating Jerusalem’s liberation. That could be done through Jaffa Gate— the traditional Jewish entrance into the Old City— that many locals use on Jerusalem Day. But by parading through the Muslim Quarter, by forcing Palestinians to close their businesses, by restricting their movement so that our aggressive interference in their lives doesn’t provoke violence, the Religious Zionist participants, endorsed by the state, send a clear message: You Palestinians have no place here and us Jews will do as we wish regardless of the indignities done to you along the way.

This march, which smacks of a patent disregard for the humanity of Palestinians in East Jerusalem, is a gross transgression of Zionist and Jewish values— values that I believed were the very reason for the march.

Israel’s Declaration of Independence promises full equality “irrespective of religion” or race. So too, do Israelis insist that the realization of the Zionist dream doesn’t require negating Palestinian dignity. And yet, on one of the most joyous days of the year, perhaps second only to Yom Ha’atzmaut, I had chosen to express my Zionism by trampling on others.

Home to the three Abrahamic faiths, Jerusalem has long been a local tinderbox. Today, its Palestinian population comprises around 38 percent of all inhabitants, most of whom reside in East Jerusalem. Unsurprisingly, the decades-long neglect of Palestinian Jerusalemites (for which neither side can claim innocence), coupled with ever-prevalent antisemitism and extremism in Palestinian neighborhoods, hasn’t exactly aided Jewish-Palestinian coexistence. Recent clashes have once again evidenced the fragile nature of tranquility in the city.

I reached out to Yossi Klein Halevi for his perspective, who described the march to me as “one of the greatest threats to Israel’s ability to maintain the basic cohesion of Jerusalem.” He argued that “the triumphalist dance of the flags through Palestinian neighborhoods reveals not only aggression but deep insecurity. Preserving the unity of Jerusalem, and revealing its spiritual purpose, require more delicate lovers.”

More delicate lovers indeed. Jews can and should celebrate Jerusalem’s reunification, which I believe was a divine miracle. But why should celebrating that miracle require humiliating Palestinians in the process?

This isn’t about appeasing Palestinians. This is about treating other humans with dignity.

Like many of the participants in the flag march, I believe in an undivided Jerusalem; I oppose handing over East Jerusalem to any future Palestinian state. But I also recognize that means that eventually more than 300,000 Palestinian residents of East Jerusalem will likely need to be incorporated into the Jewish state. And when that happens, I want them to feel at home.

Josh Feldman is an Australian writer on Israeli and Jewish issues. You can find him on Twitter @joshrfeldman.

I’ve marched in the Jerusalem day parade — and this year, it’s a terrible idea