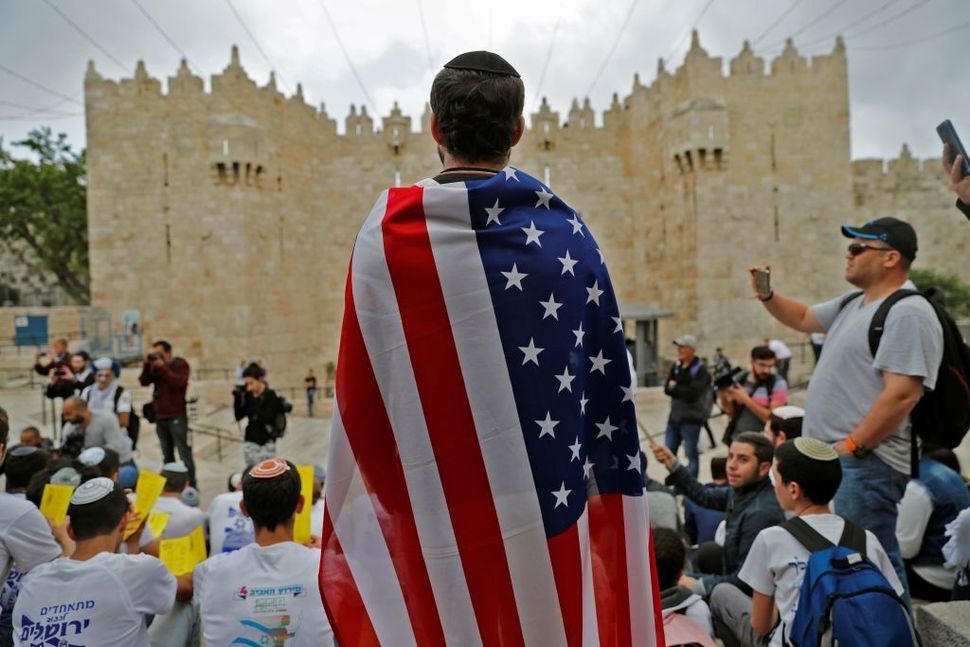 An Israeli man wears the U.S. flag in Jerusalem on May 13, 2018 as Israeli nationalist settlers celebrate Jerusalem Day in the Old City. (Photo by AHMAD GHARABLI/AFP/Getty Images) Image by Getty Images

Last month on the pages of The Forward I claimed the right to be a liberal Zionist in America, one who feels a deep connection with Israel, one who continues to envision a democratic Jewish state that exists alongside a free and independent Palestine — but also one who recognizes that a half-century after the Six-Day War and 25 years after Oslo, this vision remains out of step with the facts on the ground.

My critics insist that my position no longer has validity. The occupation has extinguished liberal Zionism and Netanyahu has hammered the final nail in its coffin, burying it deep within the bedrock of a xenophobic ethnocracy that is unabashedly Jewish at the expense of democracy.

The Knesset’s passage of the Nation-State Bill all but confirms this. To continue to celebrate Israel from abroad without standing in opposition to its leaders, my critics contend, is tantamount to a meaningless affirmation of faith in a non-existent deity. It is political passivity if not outright hypocrisy, because it lends legitimacy to the status-quo, the relentless advance of Jewish settlements on the land of uprooted Palestinians, starvation and disease in Gaza; and it endorses Hasbara, the systematic propaganda that romanticizes Israel.

But Jacob Abolafia goes further, arguing that my position is in fact “non-Zionist,” because Zionism has historically entailed a robust, even acrimonious, political intervention from the Diaspora. “What has always defined real Zionism is not titles, slogans or words — it is actions, and a belief that changing the course of Jewish history is not just possible, but necessary.”

Perhaps ironically, Abolafia maintains, IfNotNow far more reflects the original spirit of Zionism, because its members vigorously oppose the politics of occupation by taking to the streets, by confronting members of Congress for their unquestioned support of Israel’s policies, by infiltrating Birthright and Jewish summer camps to effect the liberation of the Palestinians from Israeli subjugation.

But Abolafia is mistaken. My reluctance to tell Israelis how they should chart their future, choose their leaders, deal with their neighbors from the comfort of my professorial armchair in North Carolina is hardly apathetic. I teach Jewish studies to college students, including a full course on the history of Zionism and Israel.

My class is scholarly and balanced. I do not feed my students Hasbara. The students learn the Palestinian narrative alongside the Zionist one. “Nakba” and “the occupation” are not unspeakable dirty words. We treat the Jewish people’s political claim to their ancestral homeland as a meaningful idea born in a particular social context, not as an eternal self-evident truth.

Activists often scoff at the idea that education is a remedy for the ills of society. They insist that merely questioning an unjust status-quo disingenuously perpetuates injustice under a phony veil of concern. This is why IfNotNow is currently staging ostentatious walkouts of Birthright. Videos of young travelers telling their guides they are leaving their all-expenses-paid trip to go meet with Palestinians and to see the occupation have gone viral. Activism yields results, whereas education leads to ineffectual contemplation.

I have no intention of measuring the efficacy of young activism against what I do in the classroom. But my students finish the semester with a far more nuanced understanding of the complex relationship between Jewish history and modern Israel than they would otherwise have. Although they may never take to the streets and protest or set foot in Israel, they will be, at the very least, informed citizens and, I hope, conscientious voters.

They can debate a controversial topic such as Israel’s Nation-State Bill from a position of knowledge; they will deploy facts rather than the slogans that emanate from the BDS left and the Hasbara right. In our era of “fake news,” such young people are sorely needed. Contrary to Abolafia’s claim, this hardly constitutes Zionist apathy.