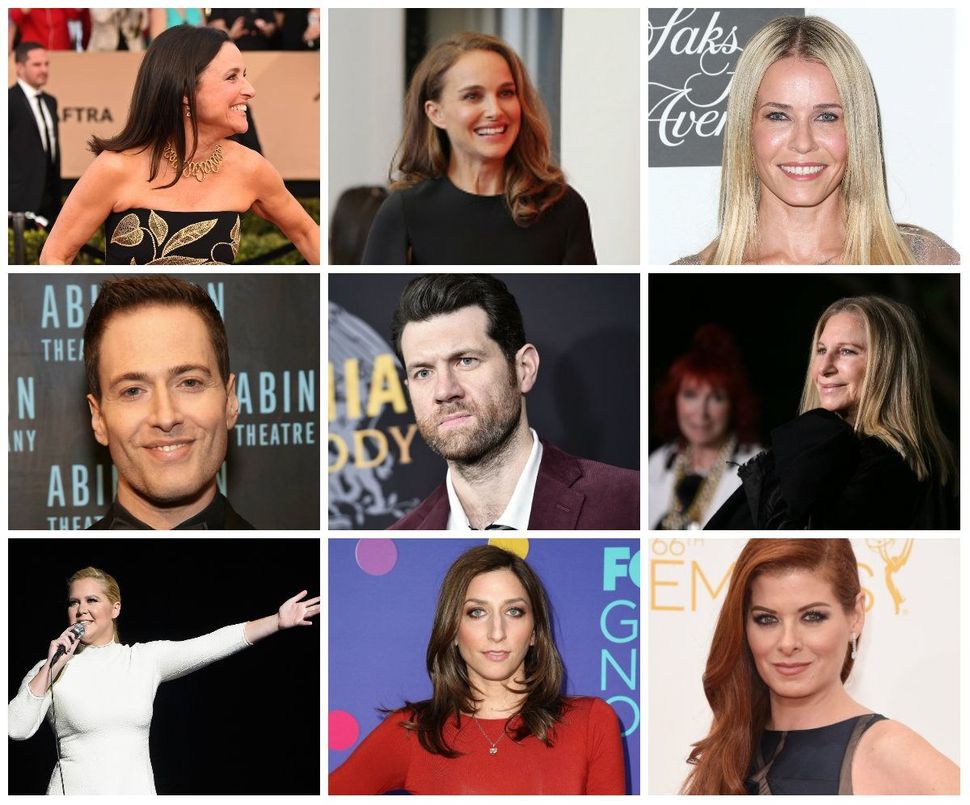 Three overlapping groups have been primarily responsible for leading efforts to get out the vote for the 2018 midterm elections: Black people, women, and Jews.

Those groups also have some of the highest levels of voter participation in the country, and could make the difference between a “blue wave” or “red wall” on Tuesday.

Jewish celebrities in particular have used their platforms (and marshaled their ability to induce Jewish guilt) to encouraging Americans to vote. Some have endorsed a particular candidate, others have just urged the importance of taking advantage of the right to vote.

This year has also seen an inspiring number of Jewish candidates, who are likely to bring Jewish representation in Congress to its highest level ever. They, too, have been boosted by Hollywood hotshots, Jewish and not.

It’s worth noting that while we scoured the web for evidence of Jewish celebrities campaigning for any party or ideology, the vast majority have come out for the Democrats. But whether that makes you feel elated or downcast, don’t jump to conclusions just yet — come the first Wednesday in November, most celebrities realize they look just as good wearing red or blue.

Billy Eichner is without doubt the most zealous celebrity getting out the vote in 2018. He has been carrying the entire electorate on his beautiful broad shoulders like a proud Israelite hefting the tabernacle, and for this we are grateful. His “Glam Up The Midterms” initiative has seen him riling up young potential voters alongside the likes of Mandy Moore, Will Ferrell, and Joe Biden. His tireless work to raise voter turnout among millennials has seen him crossing the country to motivate theaters full of young people, screaming into the crevasse that is Twitter, and appearing beguilingly in this video, where an irate-looking Billy is chased down by TMZ. Warning: It’s as partisan as it is curse-filled:

It’s a brave new world when TMZ chases gay, Jewish comedians to interrogate them about voting in the midterms, and with Billy Eichner at the helm we actually like it. He’s worked for more than a year just for Tuesday, November 6. Don’t let Billy down, kids — vote.

Our favorite faux-politician has been in recovery after undergoing a mastectomy and three rounds of chemotherapy. That hasn’t stopped her from working with Multiply Your Vote, When We All Vote, and other pro-democracy organizations to raise voter numbers. Don’t let Our Lady of Curly Haired Success down — make a plan to vote.

As we all know, for decades Sarah Silverman’s main beat was fart-jokes and raunch. Now, she’s a freaking white knight for the most cherished American values, genuinely reaching across the aisle on her show “I Love You, America.” You better believe she devoted an episode to a Social Studies report-esque explanation of the problem with our democracy when it comes to voting, and got in a joke about being “barren,” too:

Don’t sleep on the hysterically funny Lister-Jones, who’s been campaigning her tokhes off.

There is still time to EDUCATE yourself before you wreck yourself. Get out there – tomorrow is the day! #Midterms #TwoWokeGirls Starring: @aparnapkin & @ZachNoeTowers @whohahadotcom https://t.co/WeWdomI4PC

Jewish comedienne-par-excellence Elizabeth Banks has been getting out the vote, pushing for voter education, and supporting young comedians in the process. And she’s rebooting “Charlie’s Angels.” If Banks can do all that, you can fill out a few boxes.

Amy Schumer has been knocking on doors — specifically dorm room doors — to get out the vote.

The star of “Brooklyn 99” loves joking, but she’s not treating November 6 like a joke at all.

Outspoken liberal Debra Messing has canvassed, marched, shared her views far and wide, starred in videos promoting voting, and, finally, has had pizza sent to the polls.

I’ve been especially moved by the millions of young people in the United States and around the world who have found their collective voice and are demanding to be heard. They are more interested in building bridges than walls. They are the very definition of hope. pic.twitter.com/6NkkWoxkfL

Not content just to release a single addressing the president of the United States, Babs has continued to preach the gospel of voting even as she does publicity for her brand new alum. And she’s 76. And our critic called the new album “astonishingly good.”

What a fantastic profile by the great Jamil Smith! #voteblue https://t.co/KKnhUGZRJr

You can say what you will about Dunham — but through a longterm health crisis and major surgery she’s continued to push voter turnout, writing postcards urging young people to vote when she couldn’t be more mobile.

Rachel Bloom isn’t just releasing and promoting the final season of her show “Crazy Ex-Girlfriend” on the CW, she also took her entire team canvassing near West Covina for Gil Cisneros. How crazy is that?

Chelsea Handler and her brother co-wrote an article about women’s health in the lead up to the election; she’ll also be participating in a telethon on Monday night to get out the vote. Like Rachel Bloom, she campaigned for Gil Cisneros and like Oprah, she knocked on doors. She canvassed for Katie Porter, spoke about her desire to unseat Devin Nunes, and has been supporting democratic candidates in Kansas, West Virginia, and Ohio. Chelsea gets a lot of hate — but how much are you doing to support the candidates you believe in?

Stopped by the Cedar Park offices of congressional candidate & military hero @mjfortexas yesterday to knock on doors in #TX31. Sign up to volunteer in YOUR closest Swing District at SwingLeft.org. Link in bio to watch her campaign video.

Regal as ever and promoting a much-hyped new movie, Natalie Portman still found time to knock on doors in Texas.

And here are some of the Jewish candidates who’ve directly received celebrity endorsements:

This Las Vegas synagogue-president-turned-congresswoman-turned-Senate-candidate has been endorsed by Schumer as well as actress and activist America Ferrera, who helped rally volunteers at Rosen’s campaign HQ last month.

Vegas turned out!!! 1️⃣- ? person selfie w @nevadastatecollege students organizing w/ #somosmas for their campus’ early voting site! 2️⃣- Canvassing for @rosenfornevada & @rephorsford who will help Dems win back the majority in the House & Senate when they win their elections! And @nelsonaraujonv for Secretary of State who will keep elections fair for Nevadans! Go canvass for them! We need them all to win! 3️⃣- Dying inside with queens @saltnpepaofficial at amazing @unlv rally (@barackobama was also there) 4️⃣- My ride-or-die GOTV partners for a decade @elsamariecollins @ryanpierswilliams Thank you Vegas! Dallas, here I come!!

Phillips, running for Congress in the suburbs of Minneapolis, has a family celebrity connection: His grandmother was Pauline Phillips, better known as “Dear Abby.” He’s also received donations from celebrities like Streisand and Owen Wilson to help him in one of the nation’s most competitive races.

The only competitive Jew vs. Jew race this year is taking place (where else?) on Long Island. Both sides have tried to bring out celebrity bigshots. Democratic commercial real estate lender Perry Gershon has campaigned in the Hamptons with Long Island native and fake Trump Alec Baldwin, while incumbent Republican Rep. Lee Zeldin has had fundraised headlined by Donald Trump Jr. And the celebrity endorsements don’t stop there: Zeldin is backed by a slew of New York sports legends like Dwight Gooden, while Gershon has the support of “Top Chef” judge Tom Collichio, whose house was defaced in August because of his pro-Gershon yard signs. 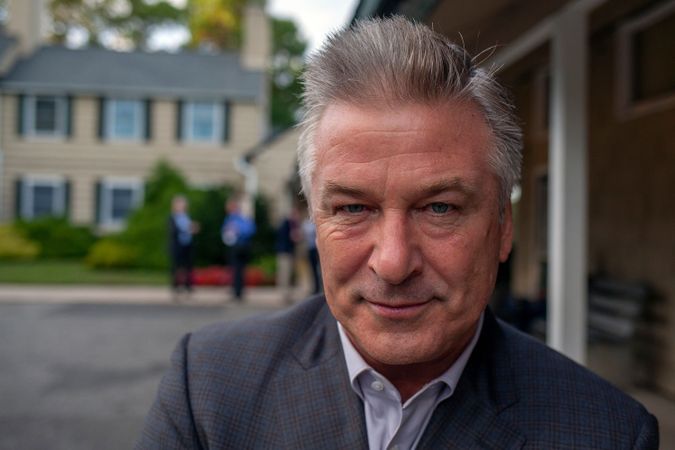