Will ‘Scarface’ return to its Jewish roots? 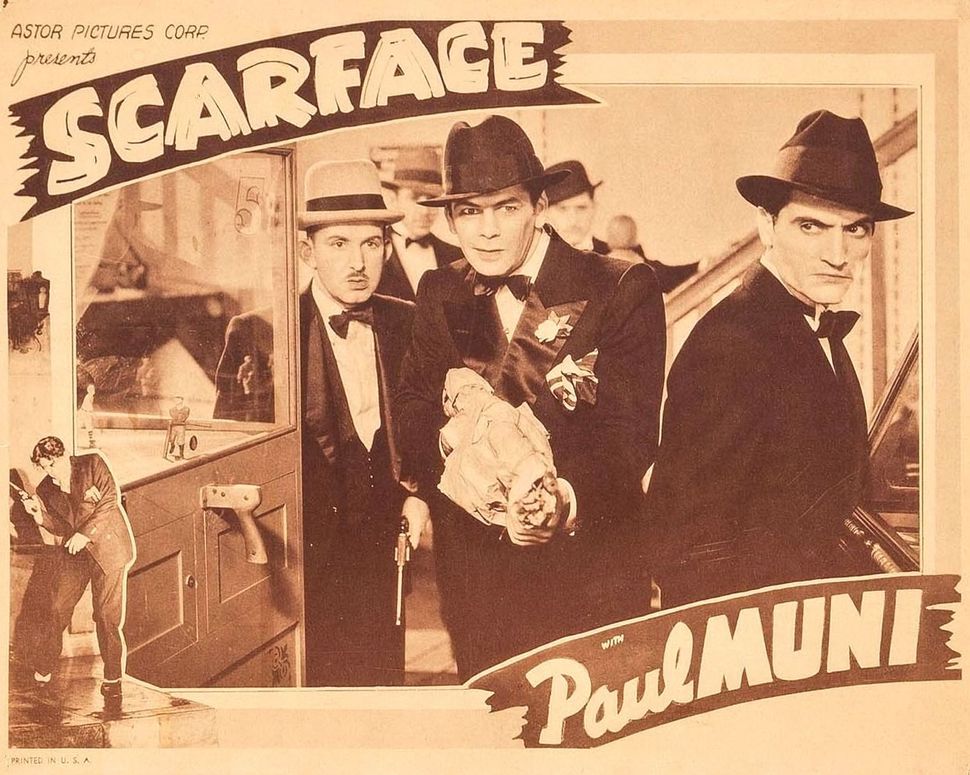 A lobby card for 1932’s “Scarface” Image by Wikimedia Commons

Brothers Joel and Ethan Coen are polishing the script to a reboot of “Scarface” for director Luca Guadignino. The sentence reads like a screen trade Mad Libs, but it is true nonetheless.

The partnership seems like an odd one. But it’s actually a pretty good match. The Coens, after all, directed “Miller’s Crossing” and, having performed script doctor work on “Unbroken” and “Bridge of Spies,” have proven themselves quite capable of playing it straight for other directors’ projects. Guadignino, for his part, has worked not just on arthouse-ready coming of age dramas like “Call Me By Your Name,” but crime thrillers like “The Protagonists.”

Plot details are sparse, but, per Variety, the new feature will be set in L.A. and will present a fresh take on the “core immigrant story told in both the 1932 and 1983 films.” At its bleeding, bullet-riddled heart, “Scarface” has always been an immigrant story. Behind the scenes, it was also a very Jewish one.

Two Howards led the charge on the 1932 film adaptation of Armitage Trail’s “Scarface,” a roman a clef about the rise of Al Capone, and they could not have been less Jewish. Howard #1 was tycoon and film producer Howard Hughes. Howard #2 was a fellow patrician and a Hoosier, Howard Hawks, whom Hughes pegged to direct and co-produce. Neither were big fans of the Chosen people.

But the man responsible for the scenario — the plot, the dialogue and the edge that Hughes insisted upon — was Ben Hecht, a first-generation Jewish American who came of age in Racine, WI and cut his teeth as a newspaperman in Chicago, where the film is set. He had recently won an Oscar for his script to “Underworld,” which established the tone and tropes for all other early gangster pictures.

“Scarface” was the sort of story that titillated Hecht to no end, allowing him to pull from his rolodex of checkered characters and his knowledge of Capone and Chi-Town. With the script — dashed off in just nine days — Hecht reified the “Underworld” formula, injecting the gangster genre with the kind of malapropisms, slang and bravura that not only fed into Brian De Palma’s 1983 remake, but nearly all subsequent media about mob life.

Hecht — who was, it can’t be overstated, known for embellishing — claimed to have had a brush with the mob himself while working on the script, writing in his 1953 memoir, “Child of the Century,” that two goons from Capone paid a visit to his office to make sure the film wasn’t really about their boss.

But the original “Scarface” wouldn’t have been nearly as effective without a strong male lead for the role of Tony Camonte. To play the part of the striving Italian, they recruited the ultimate Jew.

In 1932, Paul Muni had a celebrated if modest career in film. Born Frederich Meshilem Meier Weisenfreund in what is now Lviv, Ukraine, he began acting in Chicago alongside his parents in the Yiddish theater. He had range from the beginning. At 12, he made his stage debut as an 80-year-old man, leveraging a penchant for makeup that followed him through his time on Broadway and as a contract player at Warner Brothers.

As a kid, he was scouted by Maurice Schwartz (father of Tony Curtis), who brought him to New York to tread the boards there.

After a long run at the Yiddish Art Theatre, he began performing in English, and on Broadway, at the age of 31. He soon moved to Fox Studios, where he simplified his name to Paul Muni. He earned an Oscar nomination for his first feature, 1929’s “The Valiant” and soon had a chance to flex his makeup skills, playing a multitude of characters in that year’s “Seven Faces.” But both films flopped, and he returned to the stage. He might have stayed there, were he not noticed once more, this time by agent Al Rosen.

How did a star of the Yiddish theater come to play the lead in the 1930s’ definitive gangster film for two old money anti-Semites named Howard? It took some convincing. Muni originally turned the role down, fearing he wasn’t a good physical fit, but his wife, Bella Finkel, knew better and told him to audition. Hecht, Hawk and Hughes liked what they saw.

And what did they see? Muni’s Tony Camonte winks, salutes off the brim of his hat. He walks with a swagger that’s nearer to a waddle (this may be due to a character choice, an injury the character sustained, or perhaps the lifts and padding Muni wore to appear more physically imposing). His voice betrays his origins, but not to the point of caricature. He dresses the fop, in basket weave suits and silk robes. He oozes charm and menace, whistling in silhouette like the murderer in “M” and cavalierly lighting his matches off a policeman’s badge. To sum up his effect, I’ll quote a master:

The words of Al Pacino.

It made sense that Muni, given his immigrant background and knowledge of both New York (where the Camontes hail from) and his own hometown of Chicago, could deliver an indelible and credible performance. He drew from life and was known for researching his roles by studying dialect and mannerisms, reading relevant material and, of course, developing makeup to mask his matinee idol face. The HBO show “Boardwalk Empire” imagined Muni and his coreligionist co-star George Raft paying a visit to Capone as they prepared for their roles.

Half a century after “Scarface” set the template, De Palma revived the property, changing the scene from Prohibition-era Chicago to 1980s Miami, where Cuban-born Tony Montana (Pacino) makes his fortune off a mountain of cocaine. The remake’s tone could not be more different; where the original still excites with its car chase sequences and drive by shootings (and keeps it succinct at around 90 minutes) De Palma’s nearly-three-hour film was made for dorm room posters; it was critically reviled before it was reassessed as a critique of ‘80s excess.

Where the Coen-Guadignino collab will land on the scale of 1932’s artful camp and 1983’s lurid bloodbath, remains to be seen. There are indicators for both. The Coens, like Hecht, have a gift for crafting a whole cast of well-drawn and humorous characters (often involved in crime), but also enjoy taking their work to a surreal plane. As for Gudignino, he’s given us grounded fare, but he’s also the guy who made the thoroughly disgusting and over-the-top spectacle that was the “Suspiria” remake.

Either way, these creators surely have enough clout to make the film they want. The world is theirs.

Will ‘Scarface’ return to its Jewish roots?