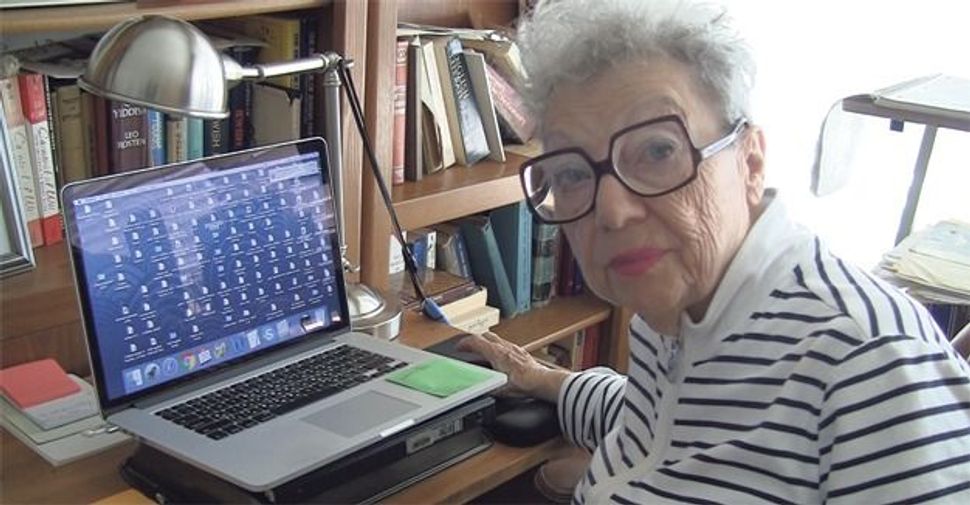 More than thirty years ago, at the beginning of the 1980s, Forverts assistant editor David Matis, who also happened to be a friend of my father’s, invited me to a performance by the GOSET Moscow State Yiddish Theater at the New York City Public Library on 42nd Street.

After the show we went out for coffee, when he suddenly he asked me a provocative question: “Can you write?”

Surprised but curious, I answered: “I don’t know!”

“Do me a favor and write three articles for me. Not just one, but three, and I’ll let you know whether you can write.”

I returned home and got to work. I read the first article to my husband, Mendl, and asked for his opinion. “It doesn’t work,” he replied. “You’re trying to imitate Sholem Aleichem and Peretz, but I don’t hear your voice at all. Write it in your own words, the same way that you speak!”

So I went back to work and penned three articles. Mendl liked them and I sent them off to the Forverts office, to the attention of Matis. Soon he began publishing my articles each week, and as was the practice in those days, every article ran with my photograph.

Matis and I would often meet for breakfast on 8th Street in Manhattan, in a Polish restaurant named Theresa’s. One day as we ate there, he said “You understand, Miriam, that I was only able to print your articles in the Forward because the editor-in-chief, Simon Weber, takes three months off every winter to go to Florida and leaves me in charge.”

“But last week, when he returned from his vacation and saw a new face in his newspaper, he threw a fit: ‘Who is she? What’s she doing here? I go on vacation and the entire newspaper goes to hell! I won’t stand for it!’”

And Matis continued, “Both Yosl Hammer, the chairman of the education department, and Meyer Rak, Hamer’s relative, agreed with Weber. They started a campaign to get rid of you until I intervened. ‘Friends,’ I said, ‘if she goes, so do I!’”

And that’s how I remained at the Forverts. I was the youngest contributor on staff, and Weber kept his eye on me. Each week I brought in my article, laid it on his desk, and rushed out. And each time he would call after me. “Wait!” he said. “Where are you running to? I have a list of topics that I want you to write about!”

“I’m so sorry, Mr. Weber,” I would say, “but I’m parked outside the entrance to the building and I’m afraid I’ll get a ticket.” Only then would he let me go.

Weber instilled a gloomy mood in the entire staff. One morning when I was at the office, I ran into the Yiddish poet Yoysef Kerler, who in the 1970s, together with his wife Anya and son Berele Kerler, had barely escaped with his life from the USSR. (Today Berele Kerler is Dr. Dov-Ber Kerler, a professor of Yiddish at Indiana University.) I saw that Kerler was walking with his head downcast, so I called out “Yoysef Kerler! What’s with the sad face?”

“The mood here is very heavy,” he replied. “Even the printers downstairs are complaining about the editor and his difficult personality.”

“Don’t take it personally,” I said. “He won’t be in charge much longer.”

And the truth is, Weber passed away not long afterwards. In his place came Mordechai Strigler, a former yeshiva student and an accomplished Yiddish writer, a true intellectual, very serious. Everything went smoothly between us, and he printed my weekly articles — until I wrote a headline I thought was harmless.

The Forward in those days still had sympathies with the Jewish Labor Bund. It partnered frequently with the Workman’s Circle, and most of the editorial board belonged to the Left. So I thought it would be funny to write an article with the headline “Frimer un bundovets,” which means “An Orthodox Jew and a Bundist.”

Apparently, that title frightened Strigler. Most members of the editorial board were Bundists, and they paid his salary, so he was afraid that running this piece could cause him to lose his position. He decided not to print it. I was upset, because if he had read the article he would have seen that “Frimer and Bundovets” were simply the names of two partners in a real estate agency in my neighborhood in the Bronx. The headline was a play on words.

If he wasn’t even going to read my article before he decided not to print it, then I should just quit, I thought. And for a while, I actually did stop writing for the paper.

But one day I received a call from William Stern, the chairman of the Forward Association, who asked: “Where have you been? We miss your articles!”

“I’m not writing anymore,” I replied. “The editor refused to print my articles without even reading them.”

“Listen to me, I’ve organized a meeting between me, you, and Strigler,” Stern said. “I expect you to be there.”

Strigler was in an awkward position, but he agreed, and I resumed writing.

Strigler was a brilliant writer and so the paper was often filled with his own articles, under a variety of pseudonyms. The problem was he did this instead of recruiting new writers. He believed that when he was gone, the Forward would simply close.

It was around that time that Hershl Ostrow, the Executive-in-Chief of the Forward Association, brought the young Yiddish writer Boris Sandler over from Israel to ensure that the newspaper would be in safe hands after Strigler was no longer around. The Association stuck Sandler in a tiny room without a window and told him to wait until Judgment Day.

Sandler was and is a well-read master of Yiddish. Once in charge, he brought in many of his friends with whom he had worked in Russia for the Yiddish journal “Sovetish heymland,” or “Soviet Homeland.”

For two years I ran a column every month titled “Facing the Future,” which focused on material for Yiddish teachers and students, including Yiddish folklore, folktales, literary and dramatic skits, jokes, and stories. Today my editor is Rukhl Schaechter and so far everything has been smooth sailing. May it always be so. Amen!