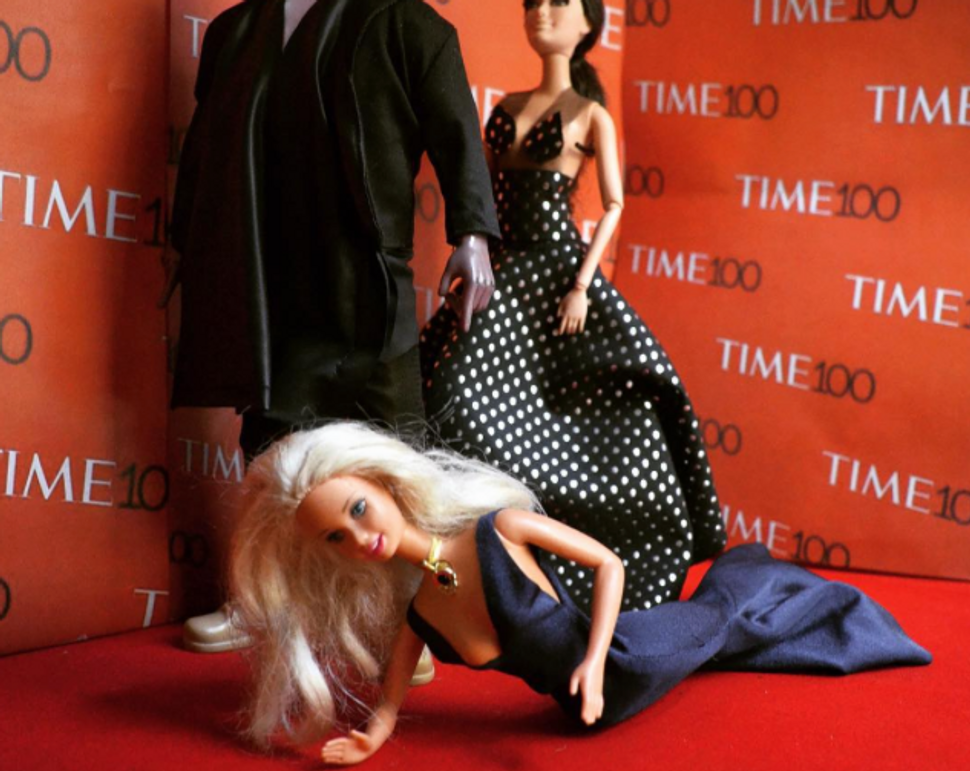 Remember that prank Amy Schumer pulled on Kanye West and Kim Kardashian? When she fell straight on her face on the red carpet in front of them at the Time 100 Gala?

Now that moment, and a few other great moments of this past year, have been immortalized thanks to our favorite Jewish doll and the self-proclaimed “Swedish Geppetto” – who makes these amazing scenes for their instagram “adollworldafterall”:

But let’s face it, this wasn’t just the year Amy fell for Kimye. It was the year we fell for her! So much so, that she made it to the Top 5 of our Forward 50!

Another unforgettable moment of 2015? That time Drake’s Hotline Bling turned into a crazy internet meme. How crazy? Even Bernie Sanders got in on the action (thanks to Ellen).

Shia LaBeouf walked on the red carpet with a bag over his head. Thank God it was paper and not plastic, otherwise he could be dead. #shialabeouf #shia #iamnotfamousanymore #nymphomaniac #germany #berlin

Ok, so this crazy moment takes us all the way back to the Oscars on November 2014 at the Oscars, but in 2015 Shia Labouef proved he really wasn’t famous anymore. He spent his time chilling with fans and watching all his movies with his many fans and talking to his fans on a special hotline at his art installation #TOUCHMYSOUL.

Yes, Star Wars the Force Awakens was definitely a Jewish highlight of the year. In case you were not aware, the film has an extensive secret Jewish history, it’s kind of America’s talmud and rumor has it that even junior Jedis sometimes turn into rabbis. Also, Carrie Fisher is all kinds of amazing in it.

This year was a great year for Jews at the Golden Globes, from Juliana Marguiles kvelling about BFF George Clooney, to Maggie Gyllenhaal winning a Golden Globe for portraying Nessa Stein in “The Honorable Woman” and let’s not forget the cries for social justice from Forward 50’s Jeffrey Tambor and Jill Soloway.

And the dirty panty business was not the only thing we cared about this year on “Orange in the New Black”. The great Kosher meal debate hit Lichtfield penitentiary this year. Even our own Anne Cohen had to ask: “Is Orange the new Black anti-Semitic?”

We hope 2016 is just as action packed! Happy new year everyone!