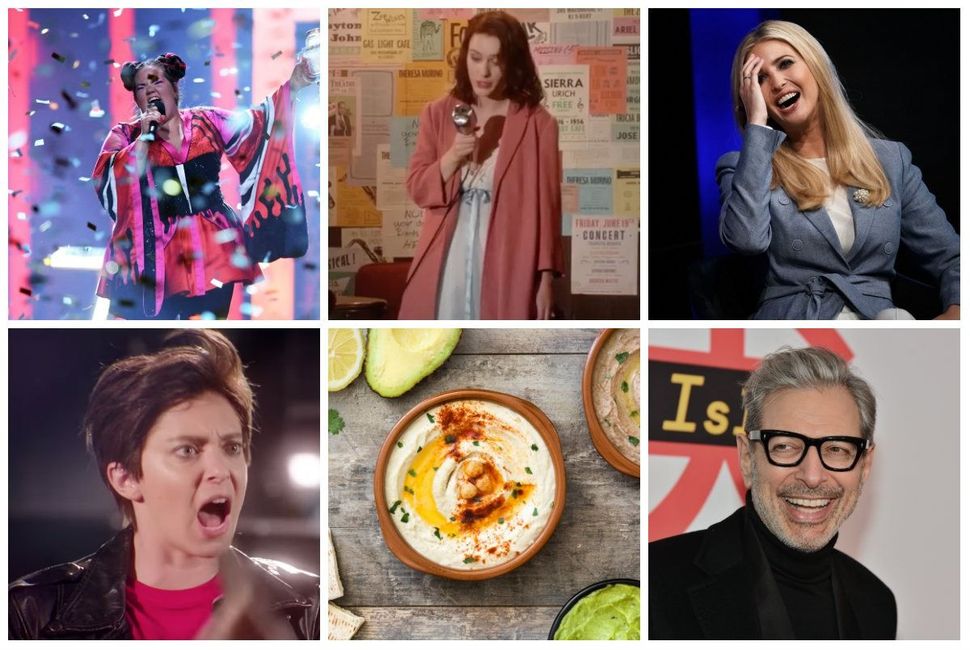 All these Halloween costumes are high heel-optional, except hummus Image by Getty/Forward Montage

Let’s get one thing straight: Halloween is by no means a Jewish holiday. It takes place entirely outside, it promises zero alcohol or home cooking, and it celebrates fear for fear’s sake (like life’s not bad enough!)

But Purim isn’t for another five months, so let’s do this.

Here are 12 Halloween costume ideas that will keep you warm and relevant on October 31, in clothing you already own. Anyone can wear them, not just ladies.

This is an extremely carefully cut GIF!

Shiny haired goy Rachel Brosnahan returns as housewife-turned-comedian in “The Marvelous Mrs. Maisel” pretty soon, giving you the opportunity to wear this perfect costume. Underneath: a nightgown or lingerie for anyone who feels like living that “Mean Girls” Halloween dictum. On top: a coat, for anyone who feels like wearing a coat at night in October! Yes, women can have it all! Feminism solved.

You could also be Wedding Maisel or Fancy Maisel or Exercise Maisel. A great ladies couple costume is Mrs. Maisel and Susie — all you need is suspenders and unbridled rage! You are encouraged to carry around and swig from large bottles of alcohol for either of these costumes.

“You do/You don’t wanna be crazy!”

If you want to know if we were inspired by Jenna and Paul’s Halloween costume in “30 Rock,” we were!

Do you get it? She used to be considered pure and perfect by the Jewish establishment and ever since refusing to accept the Genesis Prize she is a “black swan”! We are proud of this one — it is topical while also being a throwback while also allowing you to wear a leotard and feathers.

This is Elena doing an impression of Daveed Diggs in “Hamilton”!

Let’s see what we have here: two brilliant Jews from the creamiest crop of pop-culture who mostly wear warm clothes and are supposed to be out on the street anyway. Plus a ready-made excuse to ask strangers overly personal questions! Honestly, name a more iconic duo (for a dollar.) You can’t.

You do not need to be a man to experiment with being Jeff Goldblum for the night.

You should never, ever be afraid to dress for Halloween as cultural icon and notorious sex symbol Jeff Goldblum. His style is distinctive, his affect is easy to impersonate, and his fame is legendary. Go for glasses, hair gel, a cigar, and a loud jacket, and people will begin confusing you with this gigantic statue.

There are no GIFs of Karlie and Ivanka together…yet

If you’d told us in 2008 that ten years into the future Ivanka Trump and Karlie Kloss would both be Jewish and would be in-laws, we would have laughed, and we also would have started planning our Halloween costumes. But if you didn’t start back then that’s frankly fine, because any starched, structured modest gown will do for Ivanka, and any athleisure or petticoat will work for Karlie. The key thing here is to be blonde.

As Netta, Israel’s glorious Eurovision winner, you will be instantly recognizable in space buns, thick winged eyeliner, a pink robe, and a corset. If you don’t have these things, you’re not living responsibly.

This is just Ruby Rose, not Ruby Rose as Batwoman. We just love to look at her.

The new “Batwoman” TV show is going to feature a queer, Jewish Batwoman, played by Ruby Rose. To not go as Batwoman for Halloween would be to give up an opportunity to wear a flattering, topical costume that represents a triumph of diversity.

The Schmooze wrote an article about how this song is mediocre and got a lot of hate!

Pint-sized pop-stars Ariana Grande and Troye Sivan are close friends in real life and both look like they shopped at a Goodwill before making their shared music video. One is Jewish, one was just engaged to a Jew, and both like to wear relatively cold-weather friendly clothing without ceding ground in terms of midriff display. Plus you can make use of all your spare kippah-clips.

10. Family costume: Rachel Weisz and Daniel Craig and their papoose

This is what (some) families look like in America today: two exhausted, intermarried movie stars, their baby, and the taunting laughter of British agitator Piers Morgan.

The Goldstein sisters aren’t the Jewish “Potter” characters we wanted, but we’re grateful for them anyway.

11. Sister costume: Tina and Queenie Goldstein from “Fantastic Beasts and Where To Find Them”