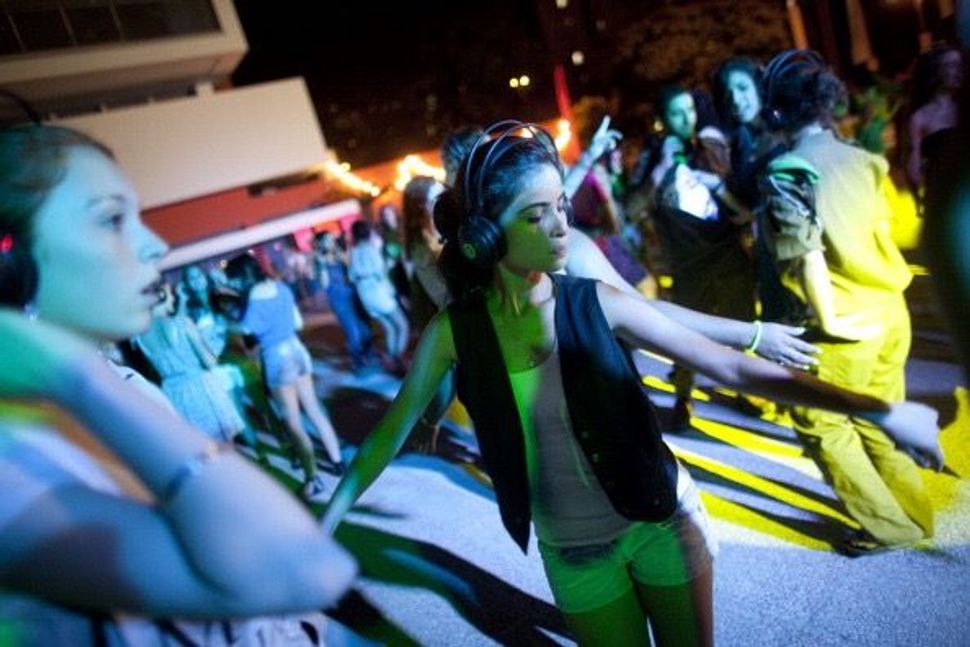 Tonight is the beginning of Yom Haatzmaut, or Israeli Independence Day. The holiday, celebrated beginning at sundown on Wednesday in Israel, commemorates the 70th year of Israel’s birth according to the Jewish calendar. And at 70, we party. Here are a couple of ways you can join in…

Don’t like the movement to boycott and divestment from Israel movement? Buying Israeli-made products is a more satisfying way of fighting it than arguing with a college sophomore. Buy Bamba, buy crembo, buy whatever one buys from Intel, buy produce, buy a diamond, or just buy a ticket on El-Al.

2.Listen to Ben Gurion’s Full Reading of the Israeli Declaration of Independence in 1948.

3.Watch “The Women’s Balcony.” It’s a phenomenal Israeli film about an Orthodox community in Israel that suffers a calamitous event that ends up exposing hysterical and painful truths about worship in Israel. And if that wasn’t dayeinu, it’s on Netflix.

5.Read an op-ed about Israel that you don’t agree with.

6.Read “All The Rivers”, the Jewish-Arab love story by Israeli author Dorit Rabinyan, which was banned in Israeli schools by the Ministry of Education. Better yet, give it to a trainee-Zionist as a gift.

7.Eat dessert hummus. We’re terrified to try the snickerdoodle hummus that keeps popping up in bodegas, but you should try it and let us know if you live to tell the tale.

8.Watch a performance by IDF soldiers of “The Fruit Of Your Garden,” a song memorializing 22 year-old IDF soldier Lt. Chen Brod, who was killed during an operation on the border of Lebanon in 1985.

9.Throw an event with Resetting the Table, an organization that works to bringing together communities that have suffered from ideological divides. They specialize in facilitating discussions on the Israeli-Palestinian conflict.

10.Read newspapers from the day Israel became a country

12.Go to a Halva-Themed Store.

13.Go clubbing. It’s what you’d do if you were in Tel Aviv tonight.

15.Watch the Best Parody of Birthright. This is from Eretz Nehederet, known as the Israeli SNL, and you’re allowed to love it even if you loved Birthright.

17.Read “Harry Potter” author JK Rowling’s powerful Potter-inspired explanations about why she did not join a cultural boycott of Israel in 2015.

20.Give yourself a Zionist manicure.

21.Give yourself an ‘Israel Pride Manicure That Celebrates Israel’s Existence While Providing A Nuanced Criticism Of Its History And Attempting To Bring In Voices That Are So Often Lost In The Conflict’. I don’t know what this would look like but I’d be interested in seeing it.

22.Drink Israeli wine Here are some recommendations. You’ll need it, after that manicure.

24.Remember that not everything having to do with activism in Israel is depressing.

25.Reminisce about how Joan Rivers liked to talk about Israel. Agree, disagree, but appreciate her burn of Selena Gomez.

25.Educate yourself about Israeli hero Eli Cohen before the movie about him comes out.

27.Give to an Israeli non-profit organization you believe in.

28.Revisit the darkly funny antics of the Netanyahu family this year.

29.Plan a trip to Israel

33.Try to grow a Theodore Herzl beard. Look how dense it is!

35.Know whether or not Israel has a constitution. You may be surprised.

39.Read about how Anne Frank is fighting Bibi Netanyahu from beyond the grave. It’s actually quite extraordinary.

40.Visit Crown Heights. It really is the Jerusalem of New York City.

41.Fall in love with the works of Israeli hipster pop-artist Amit Shimoni. His Abe Lincoln print is my favorite.

42.Watch emotional clips from the first Bat Mitzvah at the Kotel.

43.Watch the extravagant celebration of the 50th anniversary of Jerusalem’s reunification.

45.Read “To The End of the Land” by David Grossman. It is one of the greatest anti-war novels of all time.

46.Listen to the 100 Songs that are most popular in Israel right now.

48.Watch “A Tale Of Love And Darkness,” Natalie Porman’s movie-version of the Amos Oz memoir, on Netflix.

51.Pick two controversial Israel activism groups from opposite extremes, and read criticism of both.

53.Read “The Exodus,” by Leon Uris, the 1958 novel that is credited with turning Americans into Zionists.

54.Read thoughtful criticism of “The Exodus.”

57.Watch a slideshow of Israeli Actors Who Lit Up The American Screen.

58.Test yourself on the geography Of Israel.

59.Read about the women of early Zionism. (Not just Golda Meir and Hannah Senesh!)

60.Watch Amazon Prime’s dozens Of documentaries on the history of Israel and the conflict.

61.Watch “Srugim” on Amazon Prime, the outstanding TV show about dating in Israel while Orthodox. “Srugim” is joy in television form.

62.Watch Conan’s Israel Episode. You will not regret this.

63.Recite the Prayer for the State of Israel.

69.Remember that when your grandparents were born, they could not conceive of you ever doing any of these activities. Remember that Israel is ours to take care for, to improve, to hold accountable, and to celebrate.

70.Take to the streets and party. You should definitely be blasting the Israeli bop, “Hi Rak Rotza Lirkod,” (“She Only Wants To Dance.”)