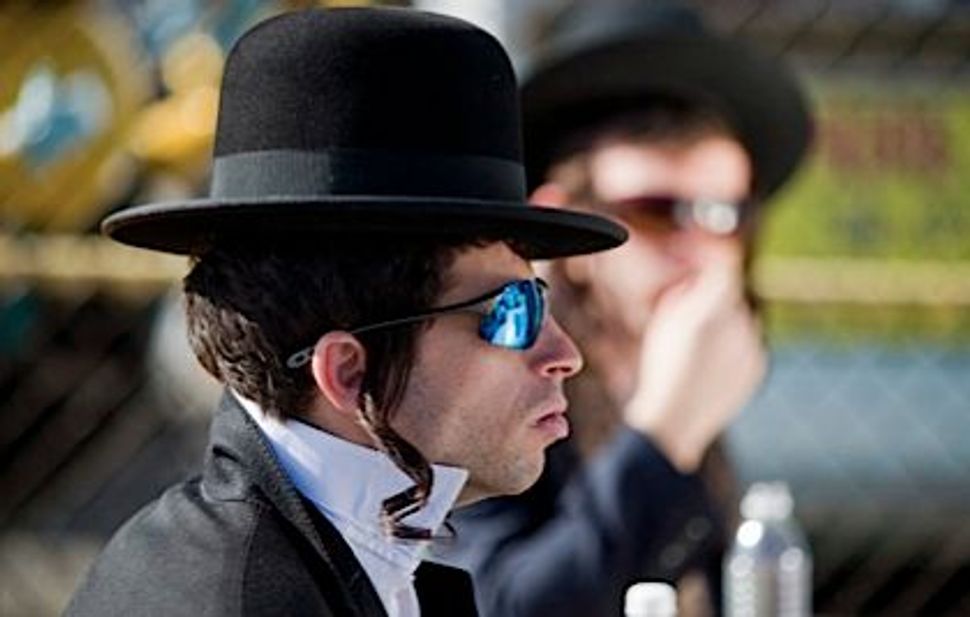 Eve Annenberg has finally hit the big time. After experiencing initial difficulties getting “Romeo & Juliet in Yiddish,” shown at Jewish Film Festivals (difficulties owing, in part, to a scene in the film with nudity), the movie premiered in January at the New York Jewish Film Festival, and receives a theatrical opening July 8 at the Film Society at Lincoln Center.

Just as significant, “Romeo & Juliet in Yiddish” has attracted the attention of marquee critics. A.O. Scott reviewed the film in today’s New York Times, and J. Hoberman — who knows a thing or two about Yiddish cinema — discusses it in this week’s Village Voice. Jon Kalish wrote about the film for the Forward as far back as June 2010, and again for The Arty Semite in January, and Eitan Kensky included a consideration of it in his recent article on the portrayal of Hasidim in movies. But Scott and Hoberman’s reviews provide fodder for further discussion.

“Romeo and Juliet in Yiddish” tells the story of Ava — played semi-autobiographically by Annenberg — a nurse by night and graduate student by day, who is given an assignment of updating the Yiddish version of “Romeo and Juliet.” A Yiddish beginner herself (other Yiddish students might experience the thrill of recognition on seeing her fast-disintegrating Weinreich dictionary on set), she enlists the help of former Hasidim who are on the outs with their community and living semi-homeless lives as petty criminals. The connection is made by Rabbi Laurence (Isaac Shoenfeld, also basically playing himself), an outreach worker who brings patients to Ava’s clinic when they’ve ingested too much of one drug or the other.

The Hasidic runaways, though none too reliable, agree to help Ava with her project. To update Shakespeare, they turn the Mantagues and Capulets into the antagonistic sects of Satmar and Chabad, with Lazer Weiss as Romeo alongside his real-life partner, Melissa Weisz, as Juliet. Within the film’s loose narrative, which shifts between Ava and her assistants’ exploits, a piecemeal version of “Romeo and Juliet” is performed, in Yiddish, according to this conception.

If that sounds like it might be confusing, it is. Scott, in The Times, is correct in his assessment that the film “is clumsy and sometimes amateurish.” Especially frustrating are the play-within-the-film scenes, which are not well connected or contextualized. But the meta aspect of “Romeo & Juliet in Yiddish” is one of its most important features. Not only is there a play-within-a-film, but most of the actors are playing versions of themselves, except in the play scenes, where they play different version of themselves (the formerly-Hasidic characters are now fully Hasidic again). In addition, the film’s subtitles aren’t just translations, but comments on the action itself, as in an early scene where it provocatively identifies fraud as “Hasidic business.”

Yet this collapsing of fiction and reality, as well as of fiction with other fictions, is probably what leads Scott to observe that the film has “the energy and inventiveness of an improvised, process-driven group project,” and that “you come away with the distinct feeling that it was absolutely thrilling to make.” I have no more inside information than he does, but I have that sense as well.

That judgement, of a flawed yet charming film, is shared by Hoberman, who calls it a “rambunctious wild flower,” and “a unique blend of psychodrama, ethnographic experimentation, and high-concept hustle.” What neither Scott nor Hoberman quite get at, however, is how funny the movie is. Weiss and co. are natural comedians, and their exploits as petty crooks make for much comedic fodder.

Scott also notes how the film is about the “desire to push beyond slogans about diversity and identity and put some of the real varieties of modern Jewish experience on screen.” Indeed, one of the primary accomplishments of “Romeo & Juliet in Yiddish” is to illuminate inter-Jewish alienation: between engaged Jews and non-engaged Jews; orthodox and non-Orthodox; Hasidic and non-Hasidic; and within the Hasidic world itself. One of Ava’s assistants — who doesn’t know who Shakespeare is — chides her for not knowing that the Orthodox fight amongst themselves. Ava’s attitude, at least initially and to some extent all the way through, is that of the secular Jew passing a Hasid in the subway and feeling the acute awareness of being a fellow Jew and, at the same time, being so profoundly different that there is almost no common ground.

In addition to “Romeo & Juliet in Yiddish,” Joseph Dorman’s “Sholem Aleichem: Laughing in the Darkness” (featured last week and earlier today on The Arty Semite), also opens today, providing the second section of Hoberman’s column and a seemingly obvious exercise in compare-and-contrast. In truth, it’s not all that fitting. Both films have a connection to Yiddish, but whereas Annenberg’s film is at least nominally fictional, experimental and contemporary, Dorman’s is documentary, conventional and retrospective. The Yiddish-speaking characters in Annenberg’s film have about as little connection to classic Yiddish literature as they do to Shakespeare, and Sholem Aleichem is probably more foreign to them than he is to the English-speaking audience who will go see Dorman’s film. Yet the pairing of the two films is instructive. If “Sholem Aleichem” represents the venerable Yiddish-speaking past, “Romeo & Juliet” portrays a large part of its present and, most likely, its future.

Watch the trailer for ‘Romeo & Juliet in Yiddish’: