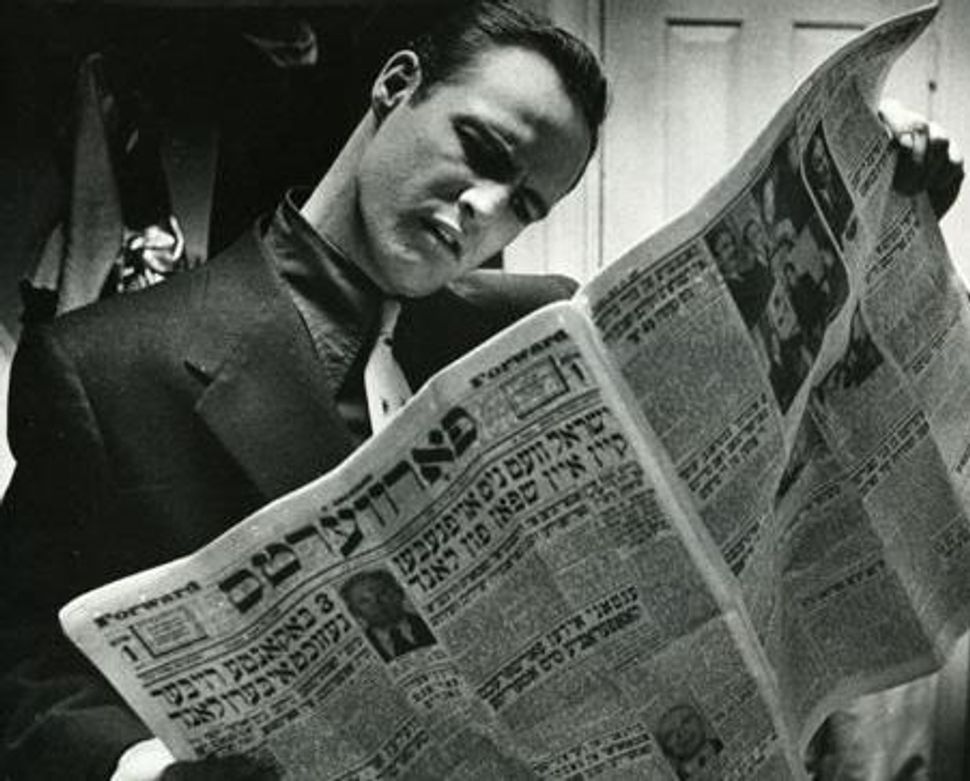 Editors put their more important pieces at our Very Forward page, but when I asked the whole staff to share their favorite Forward articles of 2017 I received a slew of responses. Though my colleagues were less forthcoming when I asked them to write something about why they liked those articles. Journalists, forever cynical, appear to not have much interest in waxing publicly poetic about, well, anything. With that reluctance in mind, enjoy the thoughts of those who chose to express them.

Jane Eisner, Editor in Chief: So hard to pick just one, but here’s a try: David Zvi Kalman’s essay on light. Kalman masterfully wove together the history and technology of light to explain how Christmas developed one way and Hanukkah another. He made me think about what Hanukkah meant in the many centuries before artificial lighting became ubiquitous for most of us, and the sacrifice ancient Jews made to celebrate the holiday. I appreciate when our tradition reminds me not to take simple things for granted, and this story taught me that, again.

Dan Friedman, Executive Editor: Some people think that my curmudgeon persona is an accurate reflection of my personality. For those people I served up What Is The Omer And Why Should You Love It Like I Do?. More serious is this powerful and nuanced piece by Batya Ungar-Sargon, “Are Orthodox Jews Assimilating To The Christian Right?” 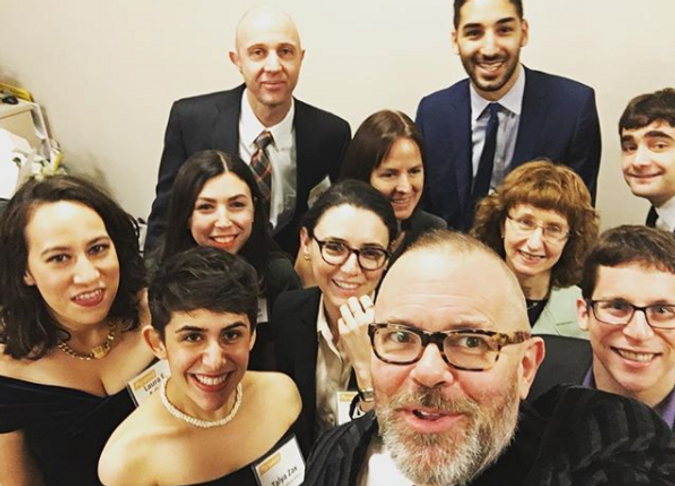 Batya Ungar-Sargon, Opinion Editor: “Are Orthodox Jews Assimilating To The Christian Right?,” Shaul Magid’s “How The New Israel Litmus Test Turns Jews Into Christian Zionists,” Laura E. Adkins’s “Should We Still Be Singing Shlomo Carlebach’s Songs In The #MeToo Era?,”Betsaida Alcantara’s “I’m A Latina Who Works For The ADL. JVP’s Attacks Shocked Me,” J.J. Goldberg’s “7 Tips For Talking To People You Disagree With In The Age Of Trump” and Caty Simon’s “The Radical Class Divide In My Modern Orthodox High School.”

Chana Pollack, Archivist: My favorite was Michael Twitty’s personal essay and book pitch. Nina Simone, as a memento for the late Lorraine Hansberry, wrote “to be young gifted and black, oh what a lovely precious dream.” Twitty is young, gifted, black, Jewish, gay and, oh yeah, a talented chef-historian. Phew.

His publisher laughingly suggested perhaps America wasn’t ready for him; Twitty took umbrage when it was further suggested that his being openly Jewish really “muddied the waters.” His own comment that it is not “what they do,” but “what we do, how we respond” that matters. His commitment to researching and preserving the food-ways of his slave ancestors takes the concepts of bravery and being seen to new levels. For that, and for giving me hope, in a very dismal period, in the power of art — in this case the culinary arts — to create ongoing necessary change, for that I am so grateful, encouraged, amused, and proud.

Laura Adkins, Deputy Opinion Editor: The American Jewish community is beautiful, diverse, ingenious and unabashed — and no other article I’ve read in the Forward illustrates this better than Scribe contributor Andrew Altman’s November 3rd article,“Why I Chose To Attend Public High School Even Though I’m Ultra-Orthodox.”

Altman, who is both a black-hat-wearing ultra-Orthodox Jew and a senior in a Baltimore public high school, illustrates how one doesn’t need to forsake religious values to thrive in the modern world. From honoring his grandfather’s survivor legacy by building a scale model of Auschwitz to organizing events with less religious Jewish students and forming interfaith friendships, Altman has flourished as a leader despite his very untraditional choice of school. His brilliance and wit, as well as passion for his studies, classmates and Yeshivish home community, make this personal essay my favorite Forward read of the year. 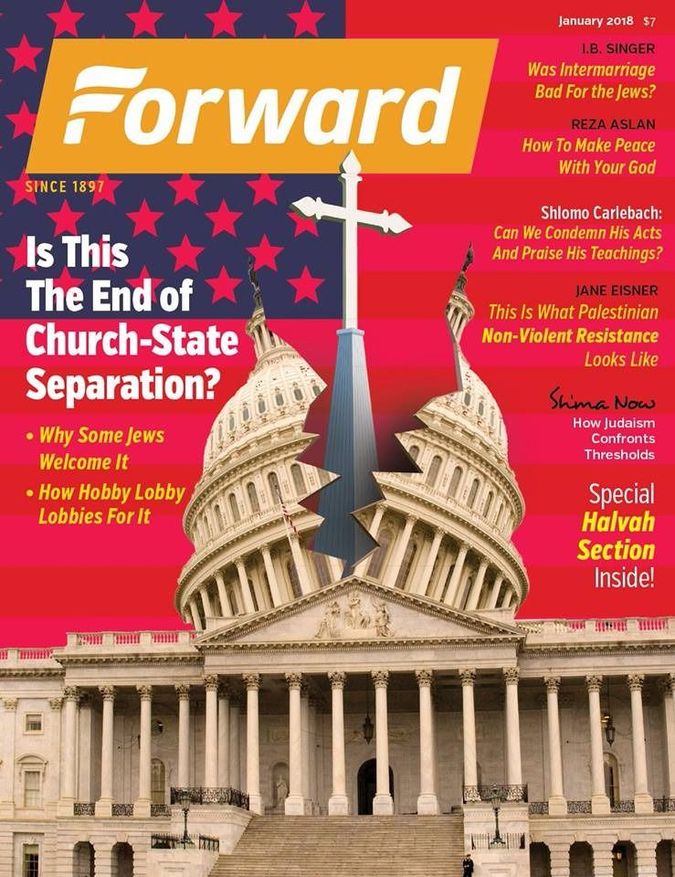 A look ahead to 2018. Image by Facebook/@jewishdailyforward

This year, the Jewish community — like everyone else in America — was forced to reckon with allegations that male leaders used the power of their positions to get away with acts of sexual violence, in some cases for decades. The Forward has been there to shed light on these issues, and to analyze what steps can be taken to rectify past sins and prevent future ones. Careful reporting from our own Josh Nathan-Kazis led to new revelations about impropriety and power imbalances in Jewish communal spaces, and thoughtful op-eds from Forward staffers and contributors examined old and new allegations and the proper responses to them. 2018 will inevitably bring us new reports and discussions about sexual misconduct, and the Forward will be there to make sure that they are not overlooked or forgotten.

Teri Zucker, Copy Editor: I really hope this does not come out sounding like a eulogy. One 2017 piece that touched me very much was about the late Chicago memoirist Amy Krouse Rosenthal, who, as she was dying from cancer, published a love letter to her husband in The New York Times, framing it as a personal ad: “You May Want To Marry My Husband.”

For the Forward, the Chicago-based writer Aimee Levitt wrote a lovely meditation on Rosenthal’s legacy: “Amy Krouse Rosenthal’s Poignant Farewell To Husband — And All Of Us.” Rosenthal, two years younger than I am, was robbed of so much time. She died in March, less than a year after I lost my boyfriend of seven and a half years to colon cancer. This woman was a huge inspiration to many people other than her family, bringing joy to random people in Chicago, as she did for viewers of her video “17 Things I Made.” Her kindness and zest for life will always make me think of my late boyfriend, who at age 72 worked up until a few months before his death, loved his family, and had a wonderful, generous soul. I know he is always with me, as Rosenthal is with her loved ones.

Michelle Honig, Writer: Jenny Singer is one of the funniest writers here at the Forward, and “Is Meghan Markle Going To Be Prince Harry’s Jewish Princess?” is a classic example of her ability to weave in Judaism with wit and style. Besides, it’s about Meghan Markle, and God knows I have royal wedding fever. I’d also pick “Jewish Owned Ride Sharing Startup Strikes A Deal On ‘Shark Tank’” because it’s about my husband.

Jenny Singer, Writer: I hung on to ever word of Naomi Zeveloff’s 2013 article “Meet the ‘Are You Jewish?’ Chabad Guys” and fell wildly in love with Joshua A. Krisch’s op-ed this year on the same matter: “Does Chabad annoy you? Check your privilege.” It had the very rare quality of forcing me to reconsider my position on something I felt strongly about. Hearing typically liberal self-righteousness coming from the pen of a Chabad Rabbi delighted me.

Steven Davidson, Editorial Fellow: Joshua Kirsch’s “Does Chabad annoy you? Check your privilege” is one piece from this year that has stuck with me. Kirsch’s wonderfully-written piece opened my eyes to the travails the proselytizing Chabadniks on the street struggle through. Persistence can be an annoyance, most certainly, but the indomitable will that Kirsch describes reminds me of the beautiful faith inspiring their actions that I may not allow myself to understand. I will continue saying, “no thank you” or “I already had a little tefillin” today to any Chabadnik that approaches me — but I will admire them as I do.