18 Awesome Things That Happened To Jews In 2018 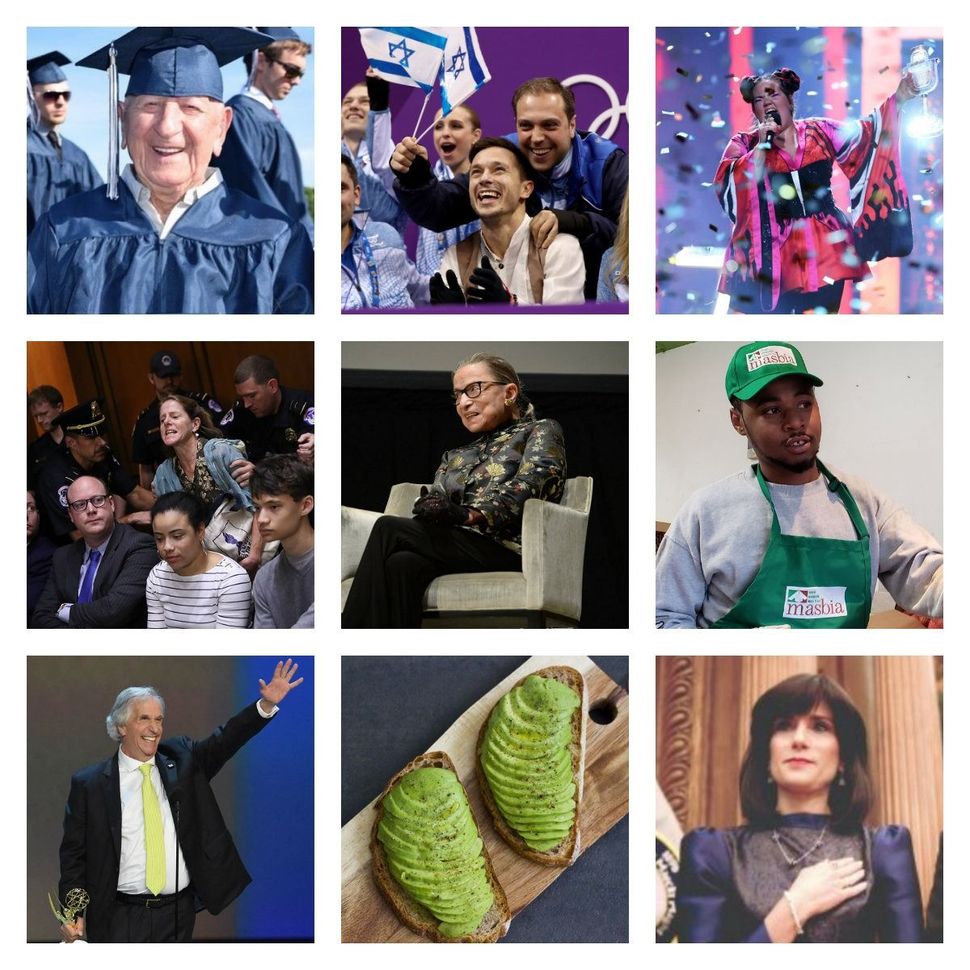 Beauty-queens-turned-diplomats Sarah Idan and Adar Gandelsman became dear friends and allies, even though they met when Idan was the year’s Miss Iraq and Gandelsman was Miss Israel. Despite threats that caused her extended family to flee Iraq, Idan stayed public about her relationship with Gandelsman, going on to make a warm visit to Israel. The two women also partnered on a fundraiser for Israeli emergency services, ignoring a cacophony of criticism in favor of friendship.

Quai James, the man who went viral mocking a Hasidic child did deep, public teshuva, setting an inspiring example of the possibility of redemption through repentance.

Henry Winkler, America’s favorite sex-symbol and then, improbably, also our favorite Jewish grandfather, got his due at last, with a triumphant Emmy win.

Aly Raisman, already one of the greatest athletes living, spent the year reshaping the world as a tireless champion for sexual assault and child abuse survivors and a force against bureaucracies that protect latent evil.

Ady Barkan, a California dad, continued to be one of the most heroic people alive.

Jewish women protested with their hearts, their souls, and their might. Rabbi Barat Ellman was forcibly taken out of Brett Kavanaugh’s Supreme Court nomination hearing, screaming, “It’s a shonda!” Jewish actresses Amy Schumer and Emily Ratajkowski were arrested later in the hearing process. Sara Atkins, an Orthodox mother of five, was arrested at the hearing. Atkins’ five children all have serious diagnoses that require regular medical care; the arrest was her 10th in the past two years.

Justice Ruth Bader Ginsburg had yet another year of jubilance and justice, starring in a documentary, a big-budget biopic, and a workout video. She inspired things as well as people, including an action figure and, for better or for worse, a bra.

Israel sent its biggest team ever to the Winter Olympics.

Doctor Ruth turned 90 but continues her holy work — she has a documentary coming out on Netflix and a comic book.

A Yiddish version of “Fiddler On The Roof” became not just a theatrical success but a cultural phenomenon.

Israeli technology helped rescue the boys trapped in the cave in Thailand.

Holocaust survivor Charlotte Adelman reunited with the French family that hid her in their cellar, seventy years later. 89-year-old survivor Hedy Pagremansky inspired formerly incarcerated people with her and her husband’s stories. Survivor Mordechai Miller received his high school diploma at 87. Hanne Hirsch and Max Liebmann, who met in a concentration camp as teenagers, celebrated 72 years of marriage. And 93-year-old survivor Samuel Heider had his bar mitzvah.

18 Awesome Things That Happened To Jews In 2018