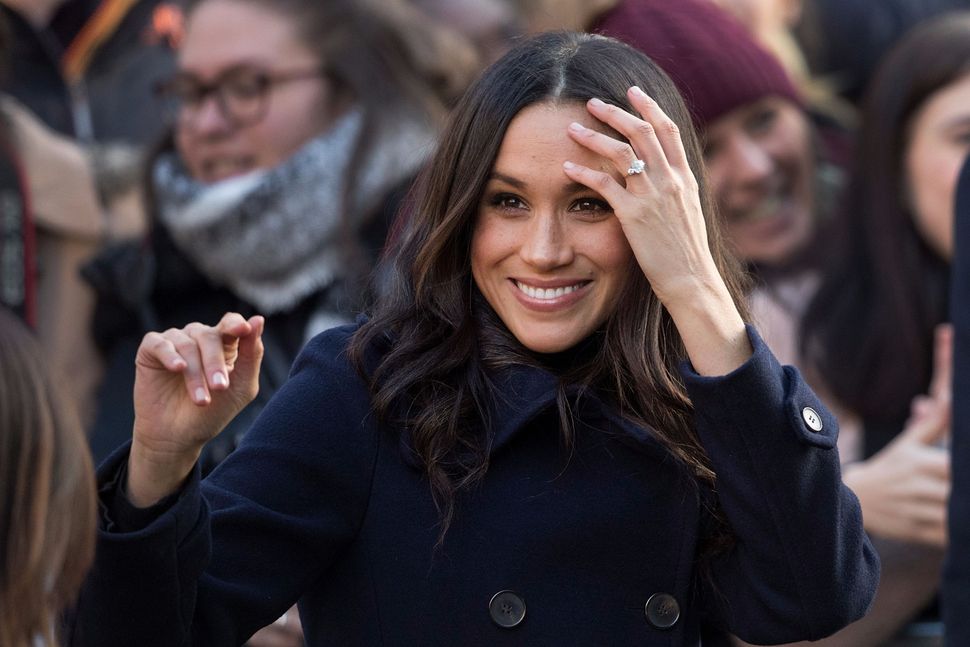 Meghan Markle, though not Jewish, was one of the most popular figures in Jewish pop culture this year Image by Getty Images

It was a great and terrible year for Jewish pop culture.

Everyone was talking about anti-Semitism and white supremacy: Major celebrities, Robert E. Lee’s descendents and The Real Housewives of New Jersey all had a say. Gal Gadot’s career began and Harvey Weinstein’s career concluded, several decades too late. Gigi Hadid took on Laura Loomer, Bella Hadid took on President Trump’s Jerusalem embassy announcement, “Curb Your Enthusiasm” took on America, again, and we had the final word on “Hocus Pocus.”

We wrote what we hope will be our last article on Howard Stern. (We have that hope regarding every article about Howard Stern.) Bethenny Frankel emerged as an unlikely hero, Al Franken had an unlikely fall from heroism, and our relationship with Mayim Bialik got deeper and more complicated than ever before.

1) 2017 was the year that marked the rise of two great Jewish women: Gal Gadot and Meghan Markle. Just kidding, Meghan Markle isn’t Jewish. Still, we thought she might be, giving rise to the kind of royal hysteria that only Jews can muster.

2) Why did readers of a Jewish pop-culture page care so much about scholar Ta-Nehisi Coates’s analysis of the peril of making comparisons between Nazi Germany and the Confederacy? Because The Schmooze’s audience is savvy and well-informed.

3) Your dutiful Schmooze writers need to do a 90-minute guided meditation every time they so much as hear the name “Ivanka Trump,” but you loved reading about her in 2017.

5) Lily Collins, who was formerly anorexic, starred in a movie about anorexia; her role called for her to lose considerable weight. Our think piece criticizing her participation in the project was contentious and emotional for many readers.

6) Since the time we wrote this article, Josh Tillis and Dayna Skolkin have gone on their honeymoon and gotten married (in that order) and scored slots in the Forward 50. Their wedding hora is the most spectacular we’ve ever seen.

7) Oh Ivanka! Turn away from the Dark Side!

8) This one is no surprise.

9) Ivanka Trump felt badly about the backlash to a glamorous Instagram photo of herself and husband Jared Kushner that she posted hours after her father signed an executive order imposing short-term bans on immigration from exclusively Muslim countries! But she didn’t feel badly enough about it to oppose the order.

10) This article about a white, Jewish actor pulling out of a major, lucrative film role to avoid racial whitewashing — a white person portraying a character who is meant to be a person of color — is refreshing.

11) The world series was good for the Jews this year, and readers of the Schmooze were ecstatic.

12) Who are the most popular women on JSwipe? Where do they come from? Do they have passions outside of yoga and travel? You wanted to know. (You did not want to know about “The 42 Most Popular Men On JSwipe” quite as badly.)

13) The Jewish people is divided into two groups: People who understood the Jewish joke Jerry Seinfeld made on “Norm MacDonald” and people who did not.

14) The accusations against Harvey Weinstein are bad enough; to boot, Weinstein also managed to drag the beloved Jewish performer and menschlekite actor Harvey Fierstein through the mud.

15) Lena Dunham calling a video of herself looking at Clinton-themed clothing on November 8th “a tough but essential watch” provokes a sigh even from this Dunham-Clinton fan. Still, the people want what they want, and what they wanted was to relive November 8th 2016 along with Lena Dunham.

16) Trevor Noah teared up with gratitude for his Jewish mother. We would write articles like this every day if we could.

17) Ah, yes, the article that launched a thousand emails from male Jewish Libertarians complaining about being unfairly targeted. It also launched a response from the founder of JSwipe, David Yarus, who was so kind as to come into our office to make the case for himself and Jewish men everywhere.

You can catch the ensuing video below.

The end of the year draws near, and a new one dawns! May it be a year of equality, new talent, celebrity mishaps, and all things odd and wonderful.